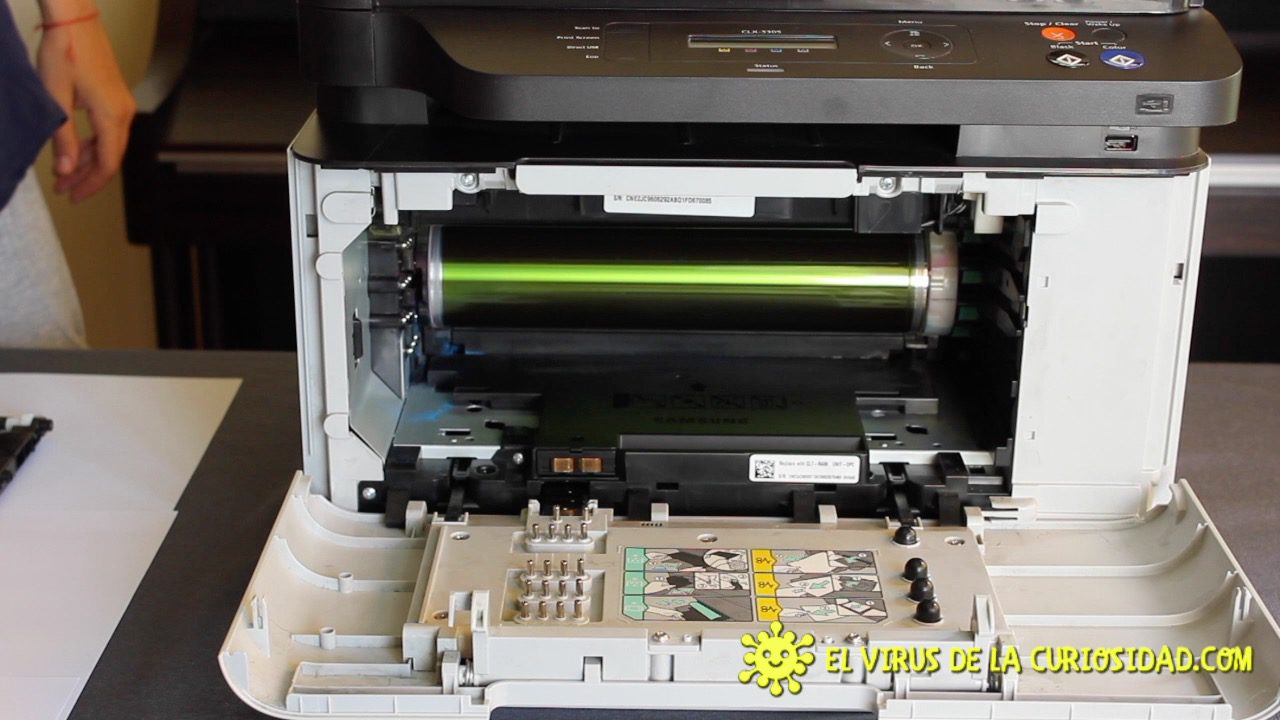 Fix the ‘Replace new Imaging unit’ error on Samsung printers spending less than 5 cents. How to do it step by step and in an easy way.

In this article we will explain in detail why the error ‘Prepare new imaging unit’ occurs in many printers, including Samsung, and how to fix it.

If you are not interested in knowing what is behind the error ‘Replace new Imaging unit’ and you just want to know the solution, you can directly watch the next video, which explains it quickly and easily.

To follow the instructions in the video you only need a 56 ohm resistor. You can buy it from the following links:

Now let’s get down to business!

What’s that imaging unit and when to change it?

Laser printers need an imaging unit (also known as a drum) to work. This component is responsible for transferring the ink to the paper. And how does it do it? A series of electrostatic charges inscribe what we want to print on the cylinder of the imaging unit. This then transfers it to the paper thanks to some heat and pressure. Finally a cleaning strip removes excess ink from the imaging unit’s surface, preparing it to receive the next information. And all this is repeated over and over again with each of our impressions. Surprising, isn’t it?

After looking at the function that the imaging unit performs, it is reasonable to think that at some point its useful life will end. When? Well, when the printer starts to print badly, either because ink has been impregnated in the drum and it is dirty, or because it no longer does the function of transferring the ink well. In this case there will be no choice but to get a new one.

However, many times the printer will ask us to change it and it will not be necessary. It will only be a planned obsolescence error (does it sound familiar?).

Planned obsolescence? What is that?

From this point on, the explanation will focus on Samsung printers, more specifically those that use the CLT-R406 imaging unit (Samsung CLP-360/365/368, CLX-3300/3305 among others). But the rest of the printers will follow more or less the same pattern, so you can also understand why the error appears and how to solve it.

In Samsung printers (as in many others) there are two components that are programmed to fail: the toners and the imaging unit. What does that mean? That it does not matter that they work well. After a certain number of copies the printer will no longer want them, it will believe that they are useless. This is known as planned obsolescence (manufacturers have programmed these components to stop working).

Focusing on the imaging unit, after 16,000 copies are made, the printer’s LED will turn red. The screen will show an error: ‘Replace new Imaging unit’.

If the printer has worked and printed well so far, it is probably the planned obsolescence error discussed. To make sure that this is the problem (although it almost always will be) we can open the printer and see if the imaging unit seems dirty or somewhat deteriorated. If not, don’t be fooled: they want you to replace something that still works perfectly.

Ok, we already know that our imaging unit works fine, but the printer doesn’t want it. What’s more, if we don’t change this component, it crashes and won’t let us print. And only because it has reached its maximum number of copies! It is time to trick the printer by resetting its copy counter. So it will think you have put in a new imaging unit.

And how do we do it?

There was someone who realized the mechanism to reset the counter and started selling ‘magic chips’ online to fix this problem. Its price is approximately $15, which compared to the $100 or so that a new imaging unit costs, not bad, right? Don’t be fooled: you can fix it for just a few pennies. So we are going to unveil the ‘secret’.

All it takes to reset the imaging unit’s copy counter is a 56 ohm resistor (about 5 cents or so) and that’s what’s inside the “magic chip.”

So how does it work? The chip we are talking about is a piece of plastic located on the front of the imaging unit. Inside it are one or two resistors.

If there is only one resistor, it is because the imaging unit is the one that came with the factory printer. If there are two resistors, it is because we bought the imaging unit separately. The resistance that will always be there is a 200 Kohms value (very large resistor). The resistance that will only be in the second case will be 56 ohms (very small resistor).

Note: In some printer models this plastic part is not by default, or it is but with the two resistors already from the beginning. For these cases, see the frequently asked questions at the end of the article.

And here’s the trick.

When the printer is turned on, it passes an intensity through this chip. If there is only the 200 Kohms resistor, the printer continues its normal operation (it continues adding copies), since the intensity is small (the more resistance the less intensity). On the contrary, if the 56 ohm resistor is also present, the intensity will be very large (the less resistance, the more intensity) and the printer will detect this intensity peak. This will reset the imaging unit’s copy counter. Also, the 56 ohm resistor will burn out (as it is not intended to pass through such a high intensity) and will no longer come into play. From now on the imaging unit will run for an additional 16,000 copies without problem. After this time, we will have to perform this procedure again to solve the error.

That is why if it comes from the factory it does not need this small resistor (it already has the counter at zero). On the other hand, if we buy it later, it does need it (it will burn up in the first use to reset the counter and will not be used again).

So far one of Samsung’s secrets. If you have this problem and you want to solve it with this trick, it is time to watch the video. There you can see step by step how to put this resistor and solve the error. And all this with only a 56 ohm resistor that you can buy from the following links:

Does this trick work for my printer model?

This trick works for all models that use the CLT-R406 imaging unit. And what models are those? Well, some of the most common models that use it are: those of the CLP360 series, those of the CLX 3300 series (the video was made with a CLX 3305 printer) and those of the XPRESS C400 series, which are also known as SLC 400. With these models, the solution is exactly the same as in the video.

There are other printer models that use the CLT-R409 imaging unit, such as the CLT-P4092. This imaging unit is practically the same as the one we use in video. The only difference is that the plastic part that supports the resistors is on the side of the imaging unit, and not on the front. But the process is exactly the same. The only thing that changes is where that piece is.

For printers that are not within these models, this trick may not work. For example, you have asked us a lot about the M2600 and M2800 series models. Unfortunately these models use the MLT-R116 imaging unit, which does not reset as the one on the video. At the moment, we do not know of a simple solution for these printers, but if we find it, we will update the information. For now, the only thing we can suggest is to buy the reset chip or change the imaging unit. At the end of the article we discuss where they can be found.

What do I do if I already have two resistors on my support (plastic part)?

If you already have two resistors in your support, you should look at their values. One of them will surely be 200 Kohm. You will recognize it because its color code, which are the bands that the resistance is painted on, is red, black, yellow, and at the end normally gold or in some cases silver. This resistor should always be kept. The other will surely be 56 ohms, and its color code is green, blue, black and finally gold or silver. This is the one you have to remove to put your new resistor. To remove it, it would be best to unsolder it, but don’t worry if you don’t have a soldering iron or don’t know how to do it, you can also cut its ends with pliers and that’s it. In its place you must put another new 56 Ω resistor.

Failing that, you can also leave both and put the new 56 Ω resistor as shown in the video, ignoring the others, and it should work too.

Can I put a resistor other than 56 Ω?

The manufacturer says that the resistor must be 56 Ω and it is what it always puts. However, there is a resistor range between 0 and 100 ohms that usually works. 0 ohm would simply be a wire in place of the resistor. For some of you 0 and 100 resistors have worked, but not for others. If you have any of these you can try, you do not lose anything. If it doesn’t work, you should use the one of 56 or one of a closer value. For example, a 47 Ω has worked in all the cases we have tested it, because it is very close to the 56 Ω one. If you are going to buy it anyway, we recommend that you buy the 56 Ω one, which costs the same and it works for sure.

What do I do if I don’t have the support (plastic part) for the resistors?

This happens a lot in the XPRESS C400 series printer models. In this case, the manufacturer has not included the plastic part precisely to make it difficult to reset the imaging unit. What I would recommend is that you buy this piece of plastic once, and you will have it forever, in case the same error happens to you again. At the end of the article we indicate where you can get it. If not, another solution that some have tried is to connect the resistor directly to the terminals of the printer cover, which are the ones that should touch that part if it were on. It is not the most orthodox thing in the world, but it can work and save you the purchase of the piece.

Where can I buy all this?